Guitar amplifiers, pedals, processors and digital solutions like DAW plugins and mobile applications are mainly used to generate guitar effects for guitarists to reach their desired sound. Almost all of them speak the same language when it comes to settings and knobs.

There are popular and widely known knobs that help guitar players to dial their desired guitar sound, such as Treble (high), Bass (low), Middle (mid), Gain, Reverb, Delay, Overdrive, Crunch, Distortion, etc. But also there are some buttons which are not quite as popular and understood, such as contour, resonance, presence, bright, damp, mix, ultra-hi / ultra-lo, high cut (hi-cut), low cut (lo-cut), and different input channels with different settings.

This guide is here for you to learn each one of them in the simplest and fastest way. You can find slightly shallower information here and you can spend your life learning about each of them as they are too deep.

“The higher the contour, the lower your mids.”

This is the shallowest way to understand what contour does even though it’s not a 100% correct definition for it. The contour makes your mid frequencies more scooped and it’s often called “a low budget EQ”, which does a great job as a single knob that can help you reach the “Smile EQ”.

“Imagine your speakers are shaking and resonating because of the bass frequencies.”

This is an easy way to remember the resonance. Of course, it doesn’t actually shake your speakers, you have the bass knob for it. But the resonance knob kinda gives that feeling from the low end. Resonance makes your distorted guitar CHUG. How does it work? It’s too long of a story for this simple guide.

“Your sound gets more present and you get closer to the speaker, but the volume is stable.”

“The bright switch left its throne to the presence. It ads treble to the mids and basses.”

The bright switch’s circuit works pretty similarly to the presence knob but as it is a switch, it doesn’t let us fine-tune its amount. It’s as simple as it sounds, it makes your tone brighter, more present and more treble.

“The more the damp, the less the effect.”

This is another shallow information, the damp knob is generally seen on reverb, delay, compressor, and noise gate pedals. It damps the high end of your wet signal so makes the effect less noticeable and darker. For example, if you turn up the damp too much on a reverb pedal, only the strongest sounds will be noticeable, so your gentle notes won’t have serious reverb but strong plucks will punch the reverb effect.

“It blends the dry signal with the wet signal.”

“They massively boost your treble or bass frequencies.”

The Ultra-High and Ultra-Low switches are mostly seen on Bass Guitar Amplifiers. They can give more than 10dB gain on your High or Low frequencies. The ultra-hi gives a boost to treble frequencies in the high end while the ultra-lo boosts the bass frequencies in the low end.

“They limit the highest and the lowest frequencies of your output.”

Also known as hi-cut and lo-cut, these rarely seen knobs are more popular on DAWs (digital audio workstations; e.g. Logic, Cubase, Ableton, etc.) and plugins, but some guitar amplifiers and pedals also offer one or both of them. The high cut simply cuts your signal after a certain frequency, if you would like to eliminate pick scratches or sliding sounds. The low cut simply cuts out some sub-frequencies you wouldn’t like to hear.

Stand-by, different input slots, bypass and all that: 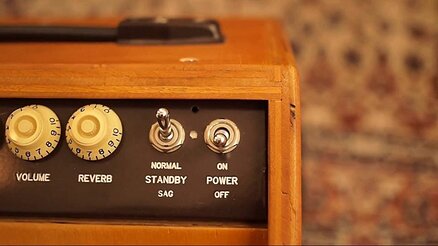 How to set all of these to reach the best sound?