We try to paint the digital world with analog brushes. Our instruments generate analog signals and we want them in our smart devices. These signals must be converted to numbers.

So how much number we must use and what is the biggest number we can give to them?

A sample is a value or set of values at a point in time and/or space.

This continuous analog signal has been measured periodically in order to regenerate it in the digital domain. At each sampling point, digital samples get a number according to the size (amplitude) of the original analog signal. 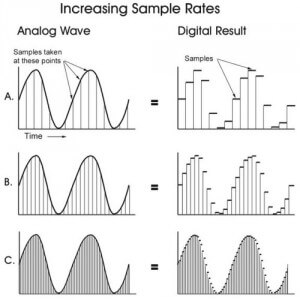 But how high must it be?

Sample rate is a resolution, like our TV’s screen resolution. The higher the better. Like our eyes can detect pixels, our ears can detect digitized sound too.

But there’s limit where our ears can not hear anymore. It is said that human ears can hear the frequencies below 20000Hz (20kHz). We are basically deaf to the sounds above 20kHz unlike dogs. 20000Hz means a vibration that occurs 20000 times per second. As we grow older this limit decreases to the levels of 14kHz but this is not relevant right now.

So, there’s no need to sample the frequencies above 20kHz because we won’t be able to hear it anyways. According to Nyquist Theorem, perfect reconstruction is guaranteed possible when the sampling rate is at least twice the limit.

It means that, if we want to sample anything we can hear, the sampling rate must be at least 40kHz. But 40kHz is not a common sample rate in the world of music.

Music production programs like Cubase, ProTools or Ableton Live sometimes use higher sample rates. Those programs take this 44100Hz or 48000Hz source file and convert it to higher resolution versions. This is called oversampling. That’s done because, oversampled files (samples) are easier to alter with high fidelity. Alteration may invovle EQ, Gain, Compressor, Saturation etc… It’s like working with a high resolution image inside a photo editor. Higher the resolution better the results.

But how big a number can we give to them?

We must think the concept of bit depth with sample rate. If sample rate is the resolution of horizontal axis (time) then bit depth is the resolution of vertical axis (amplitude).
As the bit depth increases, the highest number we can give to the sampled signal also increases. That means the dynamic range. It must not be confused with loudness. Either it is a 8-bit signal or a 24-bit, the loudest part of a signal is constant. The difference is in the details.

In terms of music, 8-bit signal is like old video game sound. It sounds digital because it is in fact digital.

In 16-bit, we are far enough from sounding digital. 16-bit is a standart among most of consumer level music related media like CDs and mp3s. 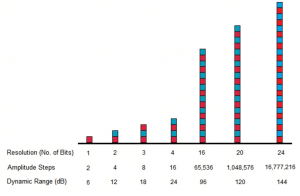